What is Ultrasonic Testing

nde > What is Ultrasonic Testing

What is Ultrasonic Testing ?

Ultrasonic equipment includes an instrument called the pulser-receiver with A-scan display and a ultrasonic probe. Among other measurements, the ultrasonic instrument measures the signal transit time and amplitude and uses them to calculate and display various measurements. Advanced instruments are used for automated inspections that store and display the results in a type of maps called B-scan  (side view) and C-scan (top view). Ultrasonic probes are either straight beam (0-degree longitudinal) or angle beam (45, 60 and 70 degree shear wave). Calibration blocks for range and sensitivity. 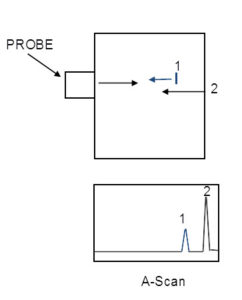 This is the simplest of UT inspections. A straight beam probe is used for this test. Sound waves are transmitted and received by the same UT probe. The transit time and velocity are used by the UT instrument to calculate and display  thickness.

One of the application is inspection of turbine disks. This inspection done by straight beam in the immersion mode. Focused probes are used for high sensitivity requirements.

Weld inspection is used for detection of flaws such as cracks, lack of fusion, incomplete penetration, slag and porosity. Inspection is done with an angle beam shear wave probe.  The probe is scanned manually so that the ultrasonic beam illuminates the weld volume. Arrival time of the signal, probe location and beam angle are used by the instrument to determine location of flaw in the weld volume. Typical code used for such inspection is ASME V, Article 4.

Automated Ultrasonic Testing (AUT) is an extension of manual UT. In AUT the probe is attached to a scanner. Probe is scanned and all data acquired. The AUT instrument does the calculation on the received signals and displays the results in maps called B-scan (side view) and C-scan ( top view) AUT is a common method used in pipeline inspections.

This is a common type of inspection done is aerospace testing. This inspection is either done in pulse-echo (reflection) or through transmission modes. Inspection is done to detect disbond and fiber damage.