what is radiographic testing

nde > what is radiographic testing

What is Radiographic Testing ?

Radiography is based on the electromagnetic radiation that transmits through a volume of material and is attenuated to different degrees depending on the amount of material loss. Radiography is a thru transmission method where the object is placed in between the radiation source and detector. A defect is a loss of material and therefore lesser attenuation and higher transmission. This difference in transmission is detected by the radiation sensitive detector that produces grey images where changes in density (darkness) are used to detect discontinuities.

Basic equipment for radiography includes a radiation source, Image quality indicators (IQI), detector. Detector can be digital panel or film.    Safety equipment required includes a GM counter, a dosimeter and TLD badges. Radiation sources can be either a X-Ray tube or a gamma ray source such as Iridium-192. Radiation energy used is in the range 50 KV to 1 MeV 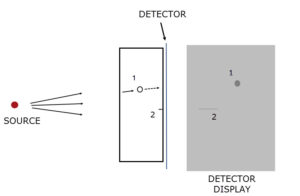