What are Ultrasonic Phased Arrays?

Ultrasonic phased arrays use a multiple element probe whereby the output pulse from each element is time delayed in such a way  so as produce constructive interference at a specific angle and a specific depth. These time delays can be incremented over a range of angles to sweep the beam over the desired angular range. For example, 40 to 75 degree beam sweep would be produced by calculating the time delays to produce constructive interference at 40, 41, 42 …75  degs. This NDT technology is also referred as Swept Beam Ultrasonic testing. The main advantages of phased array in NDE are:
1. Ability to sweep a range of angles
2. Ability to display the image in real time for the swept angles
3. Ability to focus 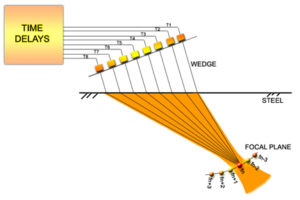 The above figure displays the concept of phased arrays. Time delays to the eight elements control focusing and beam sweep. Focal spot size (shown by the shaded orange area) is controlled by beam spread.

Focal limit is based on the wavelength and overall aperture of the probe. Same formulas apply as that of classical UT probes. No focusing is possible beyond the near field. The near field of a 5 MHz, 12 mm aperture probe using shear waves in steel is 60 mm.

A hole in a calibration block will show as an arc on the PAUT image and not as a hole (see the picture below). This is because of the beam spread. Even if the beam is focused at the hole location, the beam finite focal spot size controls the size measured by phased arrays.

Q3. If the 16 mm aperture-16 element probe has a sharper focus than the 12 mm aperture -32 element, then is there any advantage of using a more elements.
A3. The larger elements transforms to smaller element size. Smaller the element size greater is the beam sweep. However, once the desired beam sweep is achieved there is minimal advantage of increasing the elements. A 5 MHz, 1mm element size will give an approximate sweep of 70 degrees for S-wave in steel and 140 degrees for L-waves in steel (based on 20 dB drop points).

Q5. The software of my equipment allows me to enter a focal length that is greater than the near field. Is that valid ?
A5. This entry will be meaningless.