Birring – NDT for detection of HTHA

HTHA IS DANGEROUS AND MUST BE TAKEN SERIOUSLY
PLEASE SEE SAFETY ALERT JULY 2016, FROM USCSB

RELIABILITY OF HTHA INSPECTIONS
HTHA is dangerous, difficult to detect and can be missed. HTHA failures have led to severe burn injuries and fatalities. This inspection should have high degree of reliability. No chances can be taken. We have run into a significant case where Advanced Ultrasonic Backscatter Technique (AUBT) missed last stages of HTHA in a reactor (see case study below).

BACKGROUND
Steel suffers from hydrogen damage or high temperature hydrogen attack when a seepage of hydrogen reacts with metal carbides to form methane gas. This reaction decarburizes the steel, produces micro cracks, and lowers the toughness of the steel, but does not necessarily cause a loss of thickness. Detection of hydrogen attack is important to ensure the safe operation of pressure vessels and piping that is susceptible to such damage.
MC + 4H = M (M:metal) +CH4 (methane)
The type of damage caused by hydrogen attack depends on the source. The source of hydrogen in boiler tubes is from a reaction of steam and steel. Hydrogen damage in boiler tubes is, therefore, always associated with ID corrosion. However, in chemical plant the source of the hydrogen is from the flow stream (hydrocarbons) and, therefore, there is no corrosion associated with hydrogen attack.

DEVELOPMENT OF NDE TECHNOLOGY BY A.S. BIRRING SINCE 1981
Anmol Birring, President of NDE Associates, Inc., has been involved with the development of NDT techniques for detection of HTHA since 1981. Most of the inspections at that time used the ultrasonic amplitude technique, the reliability of which was always questionable. Mr. Birring worked on several projects on this subject with JGC, Japan, Idemitsu, Japan, EPRI and Chevron, Richmond. During that period, he identified the relationship of ultrasonic backscatter with HTHA. In 1990, he was awarded US Patent, 4,890,496 for developing this technology. Since then backscatter technique has been widely used worldwide in the petrochemical plants.

BACKSCATTER RECOGNITION TECHNIQUE
Anmol Birring’s inspection technique depends on recognizing the patterns of backscatter signals in the time and spatial domains to HTHA. Detection of HTHA is not straight forward and requires skill in identifying these unique backscatter patterns that match with HTHA.

CASE STUDY 2004 – HTHA DETECTED IN A C-0.5 Mo REACTOR
In 2004, NDE Associates inspected a C-0.5 Mo reactor at the Total refinery in Le Harve, France. The reactor was placed in service in 1972 . The refinery was concerned of any damage by HTHA as the reactor was operating above the C-steel curve. In 2004 NDE Associates inspected the reactor using the ultrasonic backscatter technique and found significant levels of HTHA.  Follow-up metallurgical, replication and magnetic particle tests confirmed severe HTHA. Sectioning showed that 60% of the welds were damaged. Based on the results, the refinery took the reactor out of service immediately after the inspection. The same reactor inspected previously in 2002 using AUBT by another company had reported – ” no HTHA”.  We do not use AUBT.

Many technicians conduct HTHA inspections but I am not aware of anyone who has positively found HTHA during a plant inspection. 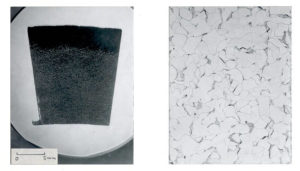 Hydrogen attack in the 18 mm thick pipe  from a failure in a Refinery de-suphurization plant in Japan. Failure date March 31, 1982. Note the depth of HTHA at failure is 70 percent.

Application of the ultrasonic techniques for HTHA detection requires an individual with a good understanding of the mechanism of HTHA and how it affects the propagation and scattering of ultrasonic waves.  One has to understand that that while hydrogen attack affects velocity-ratio, backscatter and the frequency of the reflected signal, other material anomalies can  influence these ultrasonic parameters as well and give a false calls. For example, ultrasonic frequency of the reflected signal is affected by grain size, material microstructure and surface roughness in addition to HTHA. Ultrasonic  inspection for this application is therefore not straight forward and requires a logical test methodology and a skilled operator to identify specific backscatter patterns related to detect HTHA. It is most important that owners diligently select inspection personnel.

Weld HAZ attack is detected using highly focused phased arrays. Since cracking caused by hydrogen attack is in the weld HAZ is extremely fine, the  inspection is done at a very high sensitivity.
Phased Arrays are not recommended for detection of base metal HTHA. Verification of attack can be done by surface replication.

HTHA IN PETROCHEMICAL PLANTS
High temperature hydrogen attack (HTHA) in the petrochemical is caused when the hydrogen from the stream seeps into carbon and low alloy steels at high temperatures. Hydrogen reacts with the carbides in the steel, decarburizing the steel and forming methane gas bubbles at the grain boundaries with no loss of thickness. The methane gas bubbles grow with time and result in micro cracking. The combination of micro cracking and decaburization reduces the fracture toughness of steels and lead to major failures.

Some of the factors that are important for scheduling inspections are as follows:

A general discussion of HTHA prediction is given in reference 5.

PLANNING FOR HTHA INSPECTIONS
1. The preferred approach should be to replace C-1/2 Mo Equipment operating above the API 941 limits.
2. Reactors, heat exchangers shells and other thicker equipment must be inspected at the earliest if immediate replacement is not possible. Ultrasonic backscatter inspection must be performed by skilled inspectors who who understand HTHA backscatter patterns and have a track record of detecting actual HTHA in the plant equipment, not just inspecting for HTHA.
3. Ultrasonic calibration for backscatter and velocity ratio should be performed/verified on a sample with service induced HTHA. This is very important as it gives a representative test sample to establish and verify calibration.
4. Selection of inspection locations is critical. Inspection must be performed at the hottest locations of the equipment. HTHA susceptibility is highly dependent on the heat of the plate and is not very well understood. Just a small difference in heat input or treatment can make a major difference in HTHA susceptibility. So one plate/spool may be totally free of HTHA while the adjoining plate/spool operating at the same temp/pressure conditions in the same vessel may have high levels of HTHA. Each and every plate of the vessel must therefore be tested at both ends. Preferred locations for HTHA are the intersection points of the plates/spool.
5. Any suspect areas detected by ultrasonic testing must be verified by replication of magnetic particle testing from the inside surface.

NDE Associates, Inc. has performed several HTHA inspections.  Some of  our clients are:

Note: This website is solely for informational purposes. In no event will this company be responsible for any loss or damages resulting from any viewer’s use of these materials.